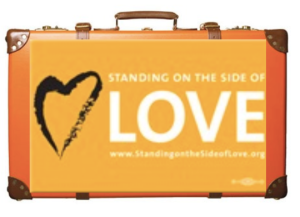 Recently in the Patheos webpage this article entitled “I Want My Religion  Back You can Keep the Ugly Baggage.”  You should read it.

The article is written from within the Christian tradition.  I resonated with it because I am a UU-Christian. But it is also a good article for any UU to read – we simply need to substitute “Religious” for “Christian.”  Let me show you what I mean in this excerpt from the article

It’s not that I’m ashamed of being [Religious]; I’m not – at all. It is just that the word “[Religious]” comes with so much ugly baggage.

Telling someone I’m a [Religious] means I must immediately follow it up with, “but not that kind of [Religious].” It’s like saying, “Yeah, sure, these are some mind bogglingly ugly suitcases, but I’ve got the coolest stuff on the inside of them. No, really, I do.”

I have had this kind of conversation sooooo many times.  I hear so many times – “I’m not religious – I’m spiritual but not religious.”  What does that mean really.  I think it often means “There is more to this world than I can see and touch, but I do not want to be getting up early on a Sunday morning to gather with a bunch of cranky people, who aren’t very friendly so I can be told how I am doing things wrong.”  There are many religious conservatives who are loudly yelling at folks about how they have done it wrong.  But let’s be clear here there are many on the relgious left, the liberal religious tradition who get all judgey too.  We don’t yell as much mostly it is socially acceptable quiet glares of steel, well placed condescension in a conversation, or simply non-engagement – a kind of quiet shunning.

The author goes on to point out the the religious right has hijacked the word Christian and religious. With all this religious baggage around, the author points out, it is as if the conservative religious folks have shown up with the lime green baggage on the carousel.  No one notices the sensible shade of grey piece of luggage (that would be the mainline Protestant model).

“If we want a [Religion] that doesn’t come so unnecessarily cluttered with all of this ugly baggage, we are going to have to start standing up more consistently and begin challenging these power plays wrapped in religion.”

And we UUs we are set for this.  We are standing up.  We are Standing on the Side of Love.  On the religious baggage carousel we have the old beat up piece that someone has duct taped a SSL sign to.  You aren’t going to miss that one.  That may not be the prettiest shade of orange – but man is it ever visible!  When we pick up this baggage people know who we are – we know who we are.  We are the People Who Stand of Love.  Come stand with us

Posted in Uncategorized and tagged spiritual but not religious, ssl, standing on the side of love, unicorns, uu. Bookmark the permalink.